The Social Impact of Street Food

We are living in exciting times where the social urban landscape is changing dramatically, and we believe not many deserve more credit for this change than those behind the Street Food Revolution. The street food stalls and markets we see on a regular basis never fail to amaze us here at in your corner HQ, yet it’s not only the visual presentation of what they offer that’s impressive, there’s a much bigger social impact to what’s happening that we need to appreciate. We are proud to play a significant part in the sector and we believe it’s time our customers and their peers were given credit for their positive social impact. 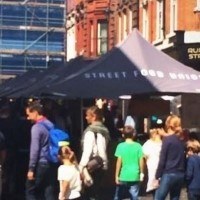 Many of these young street food entrepreneurs became disillusioned with their corporate careers and left to pursue their dreams (that’s the road our MD took way back in 2001 way before the Street Food Scene existed but there were few kindred spirits back then!). They’ve grown up with technology, with mobile phones, the internet, and computers, they’ve lived in, or moved to, urban areas, they’ve travelled widely, grown up with celebrity chefs on TV, they understand food provenance, gluten intolerance, nut allergies, coeliac disease, they respect and embrace immigrants, nationalities and cultures (are you listening Farage?), and most important of all they have a great passion for food. Combine this with a brilliant knowledge of social media – Facebook, Twitter, the web and blogs, as well as an understanding of what makes great design and great marketing, and hey presto, you have the street food revolution.

So where is it having an effect?

Well there’s no doubt it’s changing young people’s behaviour. Despite the tabloid headlines of young people binge drinking, many are turning their back on nights out in city centres and prefer to spend their weekends socialising with their friends at their local fashionable, street food market. There they can connect and bond with people having similar interests – we see this is especially true in America.

Councils and local authorities are now regaining confidence in their market assets which have often been neglected for so long. The new wave of Street Food entrepreneurs has shown so many outdated market operators that if you give your audience what they want, you can create a successful market. Non-food markets are beginning to benefit tremendously too.

Inner cities areas which were previously run down, or crime ridden have suddenly been given a new lease of life thanks to the Street Food Market. It’s created increased property values and lowered crime rates, such as in Rupert Street in Soho, where we are proud to have played a key role in creating 1 of the most exciting street food markets in Europe in conjunction with Street Food Union and Soho Estates.

In the last couple of years, we have seen many staples from the street food market such as brioche burger baps and pulled pork appear on our supermarket shelves. Now it’s so out there, we see supermarket advertising campaigns of Lidl, Waitrose and M&S fighting for the same street food, vibe positioning.

People not connected to the street food sector often ask us how long will it last? “It’s only a fad,” we hear. We couldn’t disagree more. It reminds of us the mobile phone industry of the late 1980’s – remember the brick size phones of a market that people said wouldn’t last? There are lots of changes happening like the move to indoors, residencies at pubs, bars and breweries and the increase of hospitality, the move to use retail parks, and smaller cities, as there’s no doubt London, Birmingham, Leeds and Manchester hold court now. We believe it’s here for a long time yet and the social impact will increase with even more use of rundown and unused social space as smart landowners see the potential it has in raising an area’s profile and ultimately, it’s land / property value.

We see those young people who support street food as the early adopters, and with time, a wider cross section of society and age groups will be drawn to it, as the sector gains more momentum in smaller cities. The social connection of people attending the markets will be more and more significant over time, with more entertainment, more combination of food and non-food. The times they are a-changing!

To all you Street Food Entrepreneurs out there, we salute you!

To discuss your street food stall or market requirements, we’d be delighted to hear from you. Please call 0115 932 3955 or contact us

Get our latest Brochure and sign up for our Newsletter